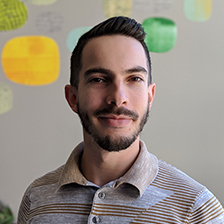 In his previous role as project coordinator, Maro provided project support for CompassPoint’s leadership development programs, including Next Generation Leaders of Color and the Strong Field Project to End Domestic Violence.

Maro has worked as a freelance copyeditor, copywriter, graphic designer, and social media manager. As a volunteer, he’s tutored with Reading Partners and worked as an online organizing intern for Tenants Together.

He was associate producer for Climate Theatre during its residency at the Artaud building and as an actor he has appeared on stage with Aurora Theatre, Marin Shakespeare Company, Impact Theatre, Crowded Fire, and other Bay Area companies.