Social movements are powered in no small part through radical leaps of imagination: a building of a collective narrative of a world none of us have lived in, but long for. If nonprofits are vehicles for social change, then shouldn’t we also have practices that embrace that spirit of audacious, joyful, and unbridled imagination?

"I think the imagination is the single most useful tool mankind possesses. It beats the opposable thumb. I can imagine living without my thumbs, but not without my imagination."
-Ursula K. Leguin

The last time we got together as a staff to think about where we’re going as a team and what kind of impact we want to have as an organization, we wanted to think big. Really big.

We’ve been on a journey now for a while to center racial justice in our work, to practice liberation inside and outside CompassPoint, and to think about what kind of programming can meet social justice efforts in even more impactful ways (Read more about that here.)

Along the way—and with the support of consulting group co-LAB (Maura Bairley, Monica Dennis, Viveka Chen)—we’ve drafted an organizational transformation plan, outlined key strategies, and re-grounded ourselves in a new set of values (which we’re excited to start sharing with you throughout the year as we continue to evolve). But maybe most importantly, throughout our change process, we’ve stepped outside of our comfort zone to share our biggest hopes and dreams for what we want the world to look like with each other.

Social movements are powered in no small part through radical leaps of imagination: a building of a collective narrative world none of us have lived in, but long for. If nonprofits are vehicles for social change, then shouldn’t we also have practices that embrace that spirit of audacious, joyful, and unbridled imagination?

As a group, one of the questions we’ve been thinking critically about is how to center liberation in our work with leaders to break down approaches to leadership and organizing teams that are fundamentally oppressive. In other words, how do we make sure our deepest beliefs around social justice are actually showing up in our leadership practices? How do we live that leadership ethos out at CompassPoint and help other teams do the same?  But orienting ourselves toward broad concepts like liberation or equity can be tricky. How can a group of people start to build a common vocabulary or context for those kinds of aspirational ideas?

Doing that means embracing creative ways of building a visionary future together. That process may not always look like budgets, forecasts, or strategic plans. Although no one is denying the importance of those tools, they leave out something equally important: what’s our personal stake in the change we’re really driving toward? What do we feel in our bones that really energizes us as a team and community? How do everyday actions in our organizations feel purposefully aligned toward a much larger impact?

Getting to that kind of group wisdom means embracing what our friends and partners at Management Assistance Group (MAG) have elegantly outlined as a multitude of ways of knowing.

As we’ve delved deeper into exploring the kind of organization we need to continue to evolve into, embracing time and energy devoted to open-ended visioning has been key. In our work with co-LAB, we’ve tried on things like roleplay to really feel—in our bodies, hearts, and minds—what a different future could feel like.

One source of inspiration for collective visioning that really hit home for us was a project called Frames for Life, Liberation, and Belonging. Creator Evan Bissell developed it in partnership with the Haas Institute for a Fair and Inclusive Society and eight others artists. The project offers ten different ‘frames’ as windows into a more liberated future. Instead of giving textbook definitions for these frames (which include ideas like “transformation”, “play”, “abundance,” and “interconnection”), this project gathers visual artistic responses together with quotes from authors, musicians, and activists as an open-ended invitation to imagining a world built on justice and peace. 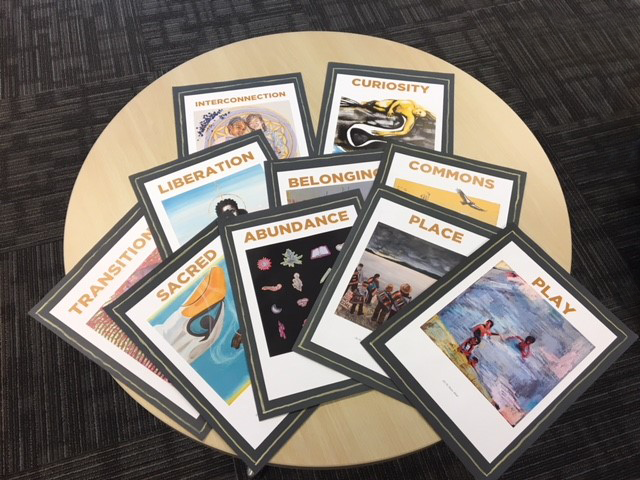 Using the images, we decided to create what we called a “tarot deck”—a tool for peering into the future. Calling it a tarot deck was a powerful metaphor because it invited everyone to step into the role of bringing a vision of the future vividly to life through their words and storytelling. Working in pairs, we pushed ourselves to go beyond giving dictionary definitions of each frame and instead interpret the wisdom conveyed through symbols in each image and draw connections to our own beliefs, stories, and dreams. Using each of the frames as a launching pad, we imagined and described what it would look like to live into each of these concepts across the world, here in the Bay Area, and in our work with nonprofit social change organizations.

What we were able to get to was a full, honest, and generative exploration of who we are and where we want to go that felt fundamentally different from a strictly ‘strategic’ conversation. Putting art, storytelling, and our own personal relationships to the work at the center was both grounding and freeing at the same time. In that liminal space between being anchored in a set of shared values and the unbound freedom of looking toward an undefined future, a beautiful tension emerged and some truly creative thinking started to percolate.

And even if most of those ideas won’t or can’t be put into action, stepping into hope together brings us back to our fundamental drive for doing this work and brings us closer to each other. As we face another potential hailstorm of setbacks for our communities in 2018, that kind of hope is radical indeed.