Witnessing Each Other: Reflections on Our Asian Affinity Space 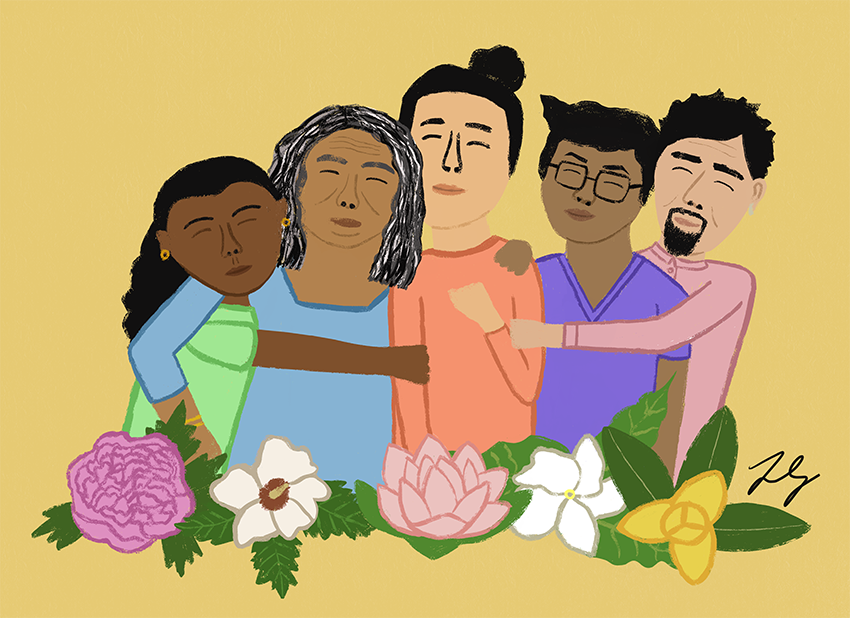 Image description: A bright illustration depicts five Asian people of different ages and skin tones in a group embrace, with closed eyes and smiles on their faces. Pink, white, and yellow flowers with green leaves in the foreground accentuate the group against a yellow backdrop.

In service of our commitment to practice liberation inside and out, and in honor of Asian American and Pacific Islander Heritage Month, we want to share how a few of our Asian staff members at CompassPoint have benefited from convening as a racial affinity space (or as they were called back in 2016 when they were first established at our organization, racial caucuses), in hopes that more social justice organizations can devote time, space, and resources to provide such spaces for their own staff.

words and illustration by Learkana Chong

In service of our commitment to practice liberation inside and out, and in honor of Asian American and Pacific Islander Heritage Month, we want to share how a few of our Asian staff members at CompassPoint have benefited from convening as a racial affinity space (or as they were called back in 2016 when they were first established at our organization, racial caucuses), in hopes that more social justice organizations can devote time, space, and resources to provide such spaces for their own staff.

The intention of these spaces is to offer safe containers for staff with shared racial identities to talk about race and racism without fear of judgment, or, in the case of non-white staff, without feeling an obligation to take on the emotional labor of explaining the oppression they experience to their white peers. When these spaces were first created, there were only two: a caucus for white staff and a caucus for staff of color. Three years later, in 2019, these spaces were activated again, but further broken down by race: white, Black, Latinx, and Asian. This new formation was in response to concerns of anti-Blackness surfacing in our organization, (which, by this point, had become predominantly people of color) and the growing recognition, internally and externally, that lumping people of color together while disregarding our different relationships to white supremacy was a disservice to the liberatory work we have been doing.

Another three years have passed since this second iteration of affinity spaces has unfolded, and so much has shifted, changed, and transformed within our organization and on the world stage since then. And yet, the throughline that continues to shine brightly in this uncertain time is our desire and need for community.

As we close out Asian American and Pacific Islander Heritage Month and continue to reflect on what it means to grow into a Pro-Black stance as an organization, here are some reflections from our Asian affinity space: 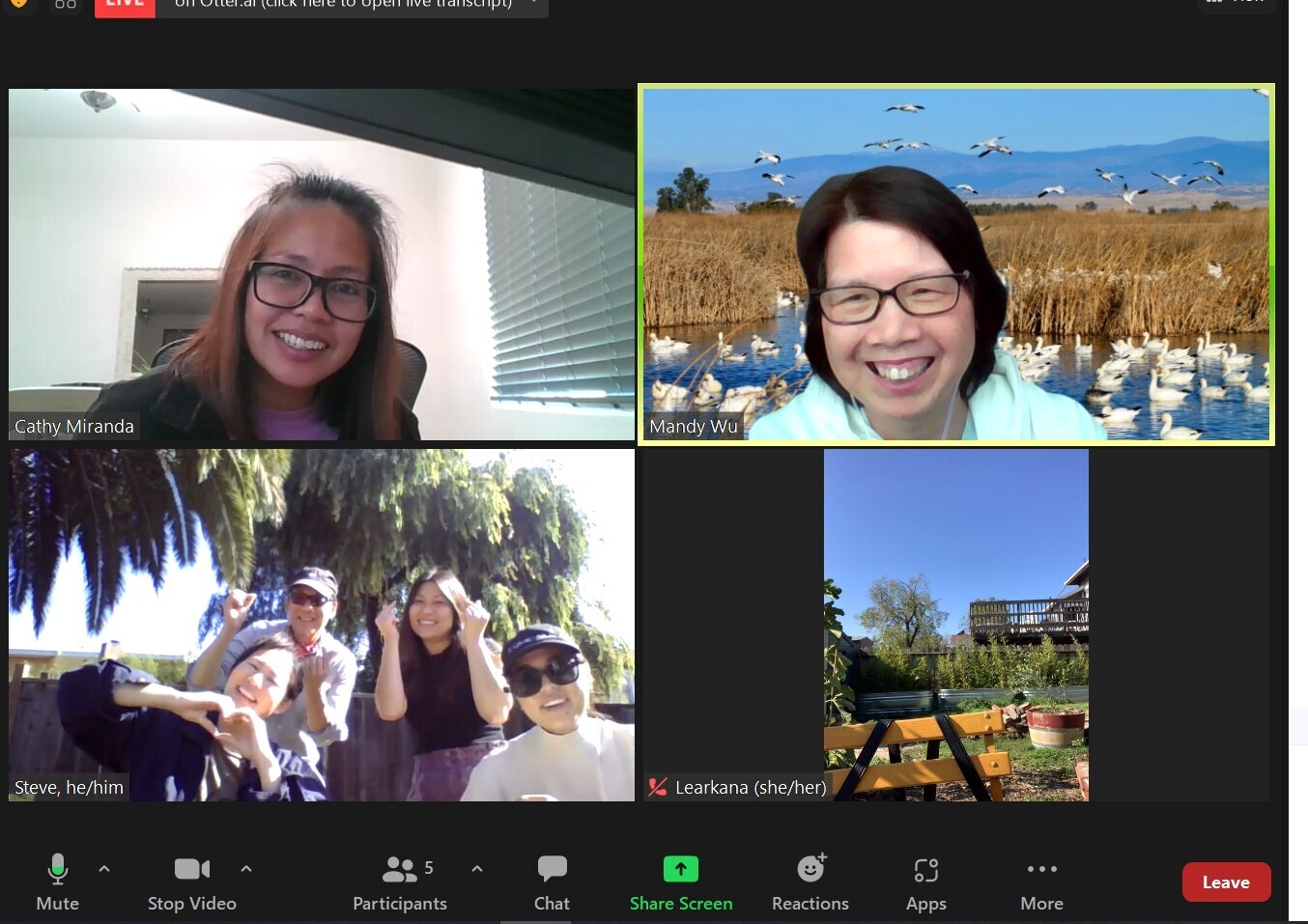 [Image description: A screenshot of a Zoom meeting split into four panels. Top left: a smiling Filipino woman wearing glasses sitting in her home office; top right: a smiling Chinese woman wearing glasses with a virtual background of birds in a marsh; bottom left: four Asian people smiling and posing outside against a backdrop of trees; bottom right: a portrait mode view of a backyard filled with plants and trees.]

I think the use of racial and other affinity groups to build a pro-Black stance  is not widespread in nonprofits, but it should be. You can't really be or act in solidarity if you aren't grounded in your own racial identities; grounded in that particular history and how it intersects with other communities. Being with my Asian co-workers in conversations about our experiences growing up, our families’ experiences of racism and assimilation has built a closeness among us. I sense that this closeness as Asian staff, despite our own different experiences, enables us to take in at a deeper level the very different systemic treatment of Black people and all other groups in the U.S. This deeper understanding of systemic racism connected to anti-Asian and anti-Blackness ideologies helps us to think about being in real solidarity when it comes to policies and priorities in our workplace. 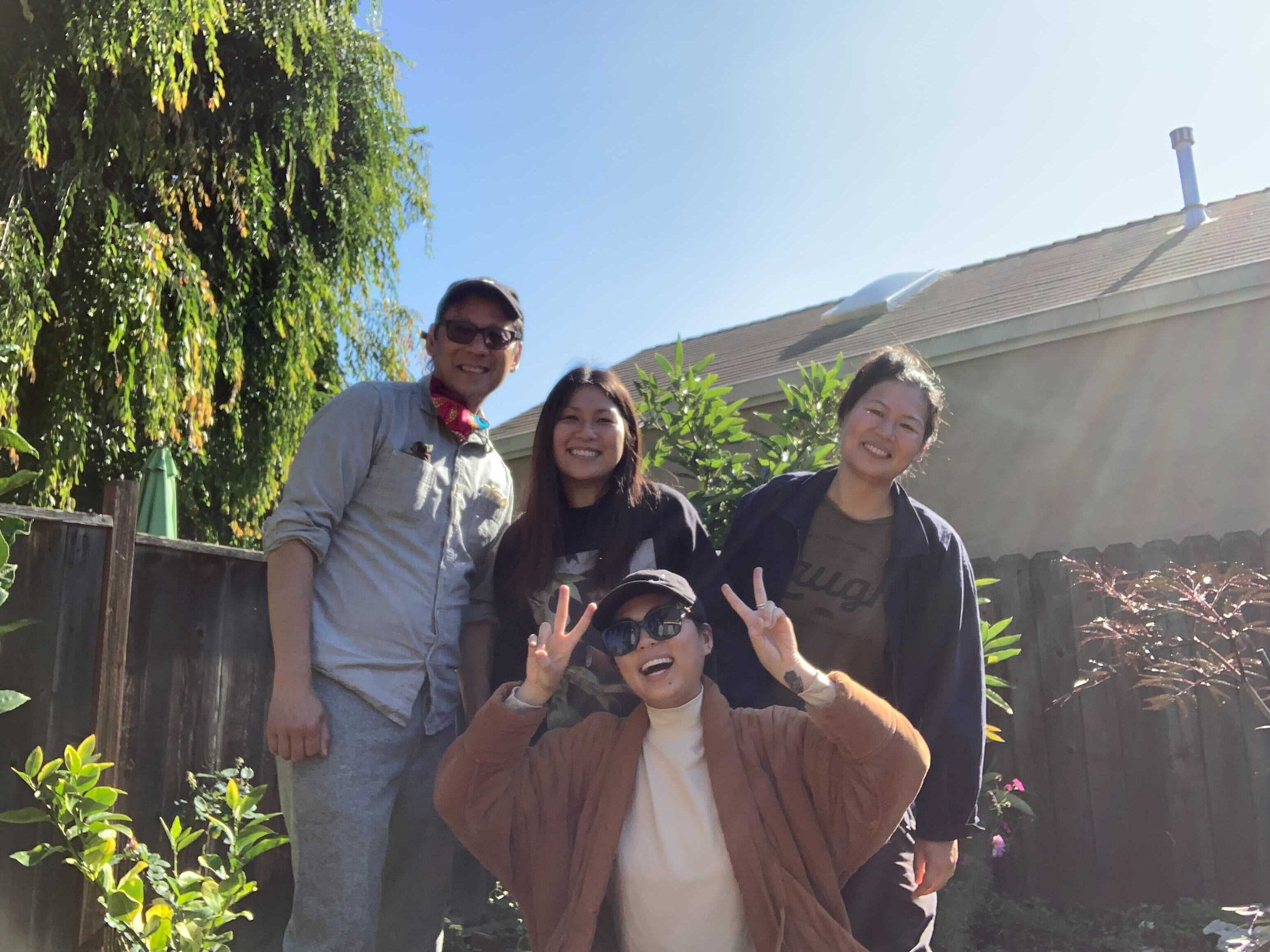 [Image description: A photo of four Asian people posing together and smiling in someone’s backyard. There are trees and plants around them and rays of sun gently falling on them from the top right side of the photo.]

So many discoveries, learnings, and appreciations in our affinity space. I could go on and on and this tribute may not be enough, so I will share a few that stand out for me:

The space is an affirmation of cultural similarity. I discovered that we may all be different in many ways, but culture is something that binds us together. Being an immigrant who tends to be submissive, I discovered my own voice and power through my Asian American colleagues who demonstrate empowerment.

One of the learnings for me is that it's already a given that Asian affinity is our root and that it’s forever in our DNA. But being in the space also taught me to understand why we discuss dismantling oppression, standing up for the Black community, and spreading pro-Blackness.

And last but definitely not the least, an appreciation: I’m vulnerable when I’m in the space. I feel a sense of trust and belonging. I appreciate being in the space where I can share my own curiosity about happenings in our society without judgment. It is a space that helps me to voice out/share my thoughts, and contribute to small groups and back out to a larger community. 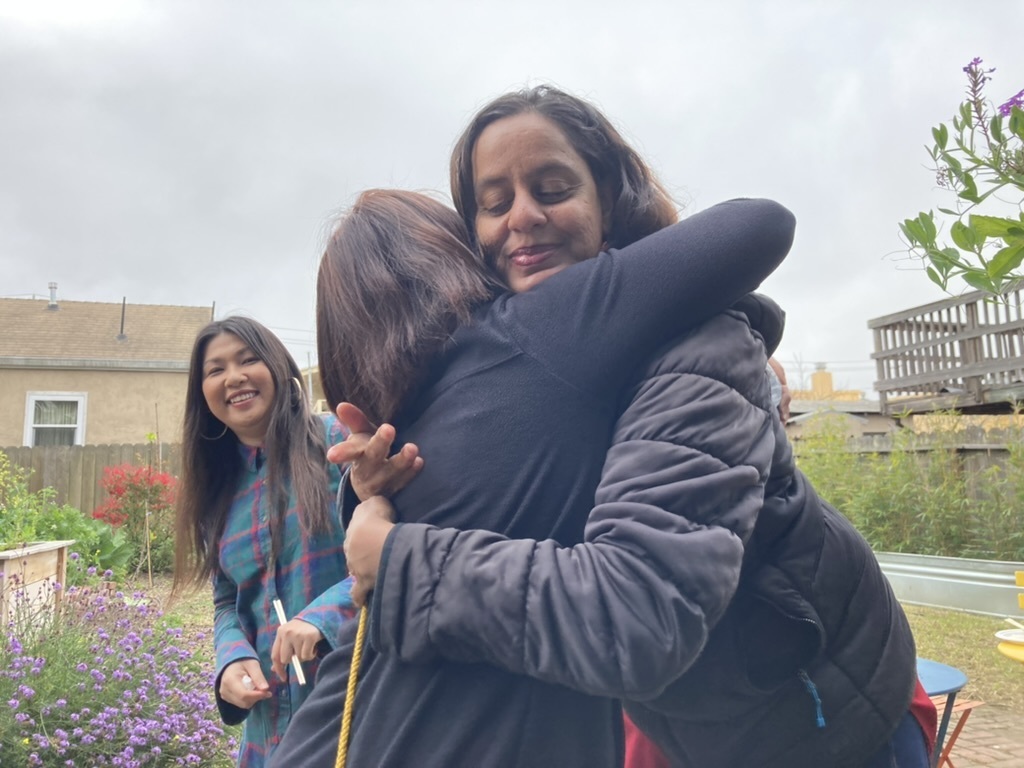 [Image description: Two Asian women in dark clothing embracing each other against an outside backdrop of flowers and other plants. To the left is another Asian woman smiling as she witnesses this exchange.]

I’m fairly new to the Asian affinity space, but I’ve experienced it to be very warm, welcoming, creative, and in line with my goal of working towards a radically pro-Black, pro-Indigenous, pro-Asian, pro-Global Majority, liberated world. I was actually surprised to come in as a newbie and hear that there had already been nuanced personal discussions about folks’ Asian identities and their relationship to anti-Blackness – and that these were intergenerational conversations where folks leaned in rather than shut down or became defensive.

The space feels inclusive to me as someone who comes from a number of intersections not often seen among "Asians in nonprofits" – I won't go into the specifics, but I know I'm not the only Asian misfit at CompassPoint! Here, I get to be a misfit but also feel some belonging. At our most recent gathering, I shared about a jarring incident of anti-Asian violence I experienced, and people were just really present with me. I almost forgot I had that vulnerable sharing moment because my memory immediately went to a different moment when we were laughing while filling our bellies with some good Asian food.

I think a space like this could benefit other Asian folks in the nonprofit sector because of the increased sense of isolation, doubt, and fear brought on by the pandemic and the sudden hypervisibility of anti-Asian violence, but also because of the stress of having to function within a late capitalist, neoliberal, white supremacist, cisheteropatriarchal reality that is counter to one’s values. We need affinity spaces. We need care spaces, support spaces, accountability spaces. And we need these spaces embedded within the institutions where we spend most of our time in order to support our collective wellbeing. 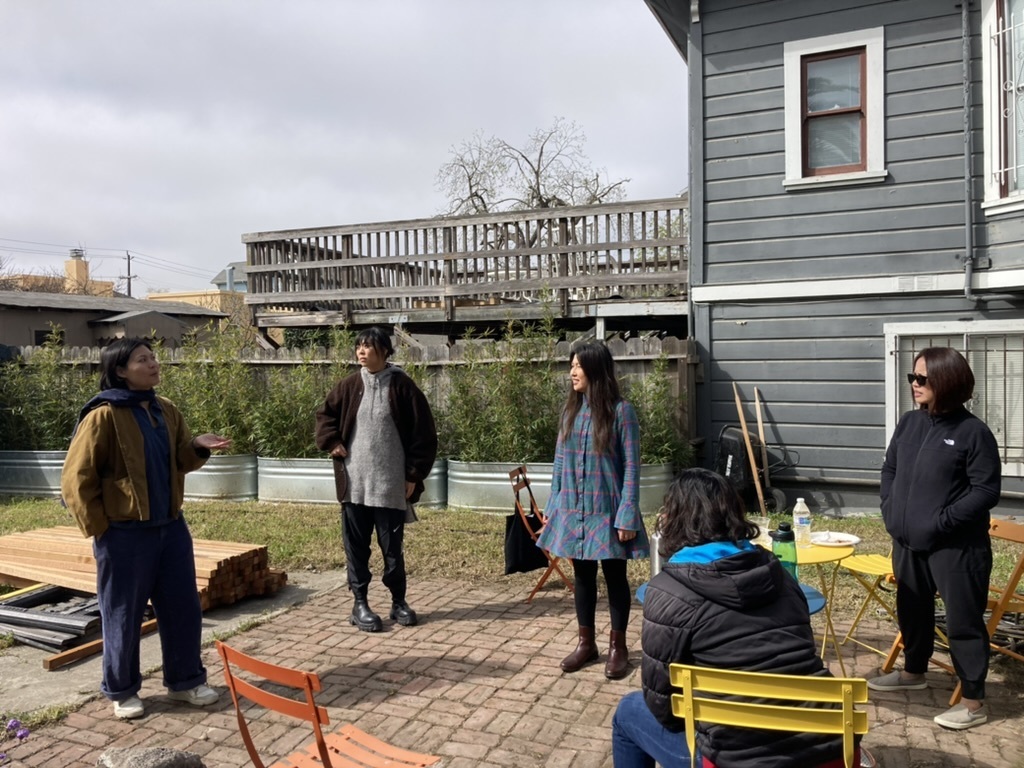 In many ways, I have personally found it difficult to navigate the complexities of working within the nonprofit industrial complex while tending to my need to be whole, authentic, and unapologetically myself. Affinity spaces I have participated in at CompassPoint have, to a significant degree, bridged this tension for me. With the Asian affinity space, it’s been valuable for me to be seen and heard in the fullness of who I am, a Chinese-Cambodian daughter of poor refugees, a diasporic Asian who is radical, anti-assimilationist, and who believes that pride in my heritage and standing up for my people can be cultivated and expressed without perpetuating anti-Blackness.

I strongly believe that both relationship building and political education are necessary for liberation. This work cannot be done if our hearts are closed off from one another. This work also cannot be done if we aren’t learning about the root causes of oppression, and drawing on past legacies of solidarity and movement building. In particular, I want to lift up the powerful friendship between Malcolm X and Yuri Kochiyama, movement ancestors whose joint birthday just recently passed on May 19th. In this latest wave of pandemic-era anti-Black violence and anti-Asian violence, I am reminded that our long-lived struggles are different, yet similar; and unequivocally intertwined. Both Malcolm X and Yuri Kochiyama understood this. My greatest hope for this affinity space is that we can invoke the spirit of Yuri as we grapple with how racism has wounded our lives, and turn towards Pro-Blackness and Black liberation struggles, just as Yuri did when she met Malcolm X in 1963, as pathways of healing and transformation. 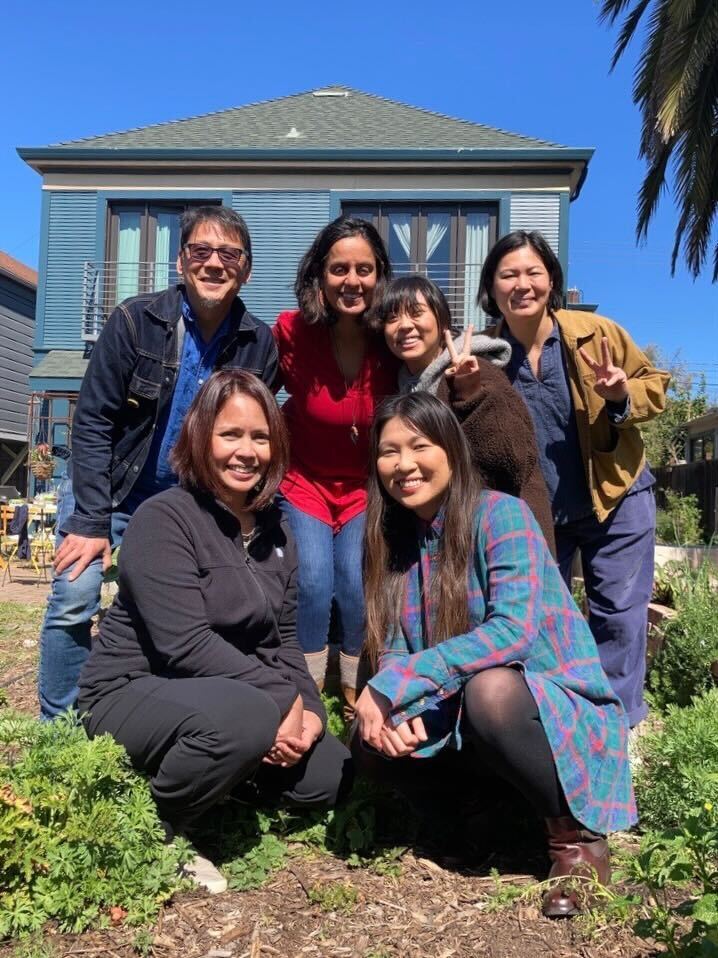 [Image description: Six Asian people smiling and posing together in a garden with a blue house and clear blue sky in the background.]

So why are racial affinity spaces so important and needed? We cannot provide a quantitative report detailing the rate at which our hearts have expanded as a result of being in this space. We cannot tell you the number of fathoms that might be measured if we pooled together all the tears we’ve shed in this space. We cannot offer a step-by-step guide on how to efficiently achieve an equilibrium between staff productivity and collective healing from racial trauma as an output of our time in this space.

What we know and feel in our bodies to be true is that simply witnessing each other can offer us a much-needed respite from a world designed to perpetually disempower and dehumanize us; the connections we forge from bearing witness of one another, in turn, can pave the way for political awakening, transformative solidarity, and radical resistance. And this–precisely this–is reason enough to continue holding these kinds of spaces.